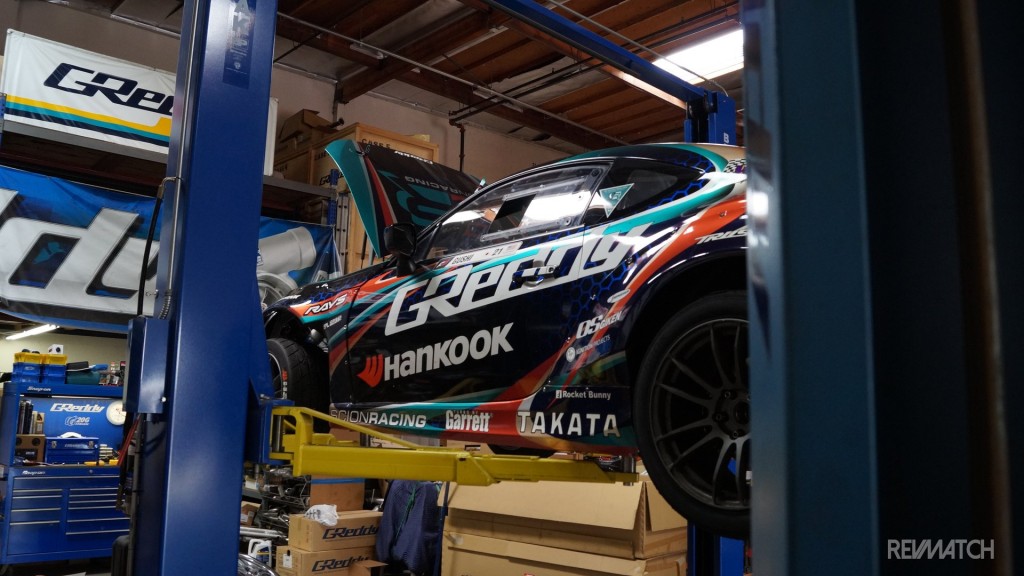 This has been in the works for a while but its finally time to unveil the covers on this post. A few months ago we were given a rare opportunity to work with GReddy Performance Products to test fit their new line up of Revolution RS and Supreme SP exhaust for the Lancer GTS. Having what seemed to be the only GTS in 100 square miles, we gladly drove down to GReddy’s Irvine headquarters to lend a hand and get a sneak peak at what goes on behind the garage doors. 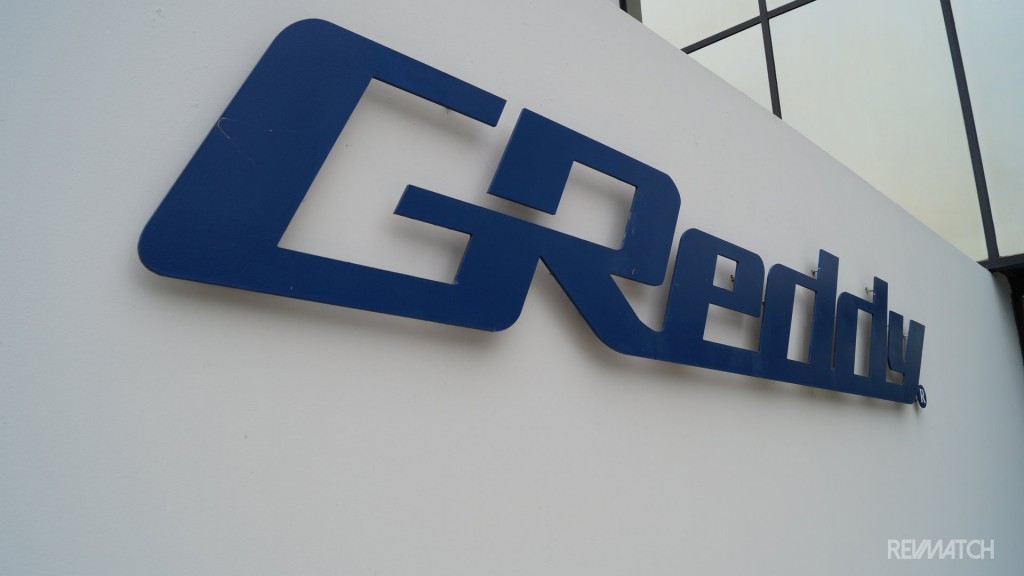 Its hard to be a car enthusiast and not be familiar with the name GReddy. Since 1977 Trust/GReddy, has been a major player in laying the foundation of the import car scene since its inception. Along with racing and winning in various race series like IMSA, JTCC, and the legendary 24hr of Le Mans, GReddy has constantly pursued perfection in manufacturing their wide array of products. From catback exhaust systems to Carb-legal turbo kits, GReddy is synonymous with high quality performance products. 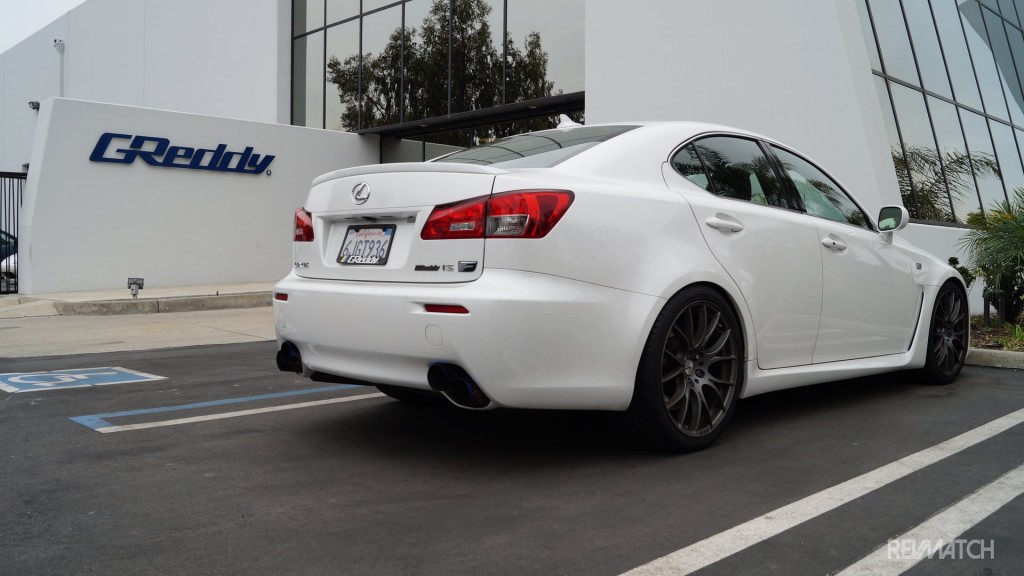 Upon arriving, we were pleased to see this clean IS-F park out front… 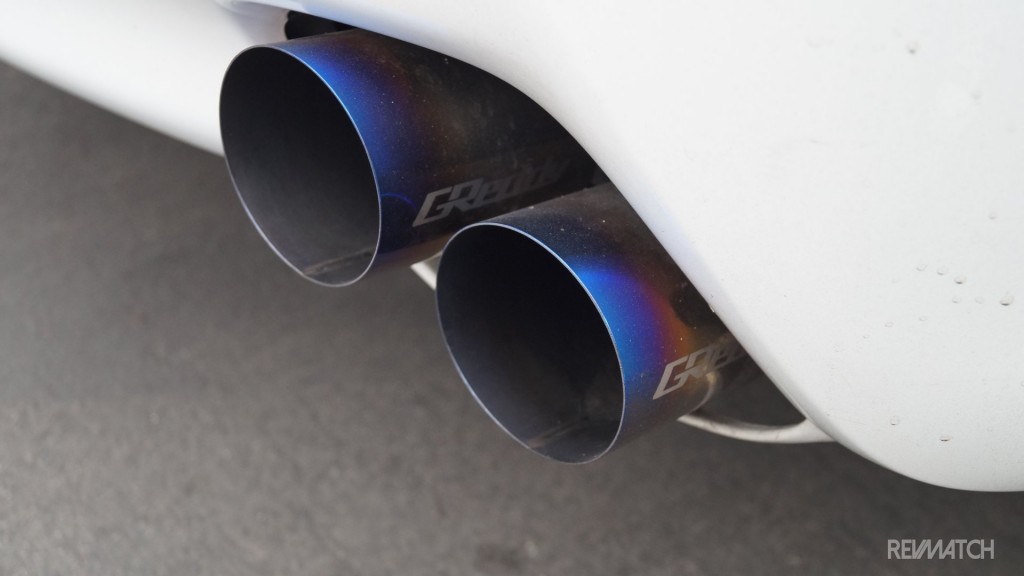 …which of course was running one of GReddy’s own performance exhausts. That Yamaha V8 must really sing with a set of pipes like these. 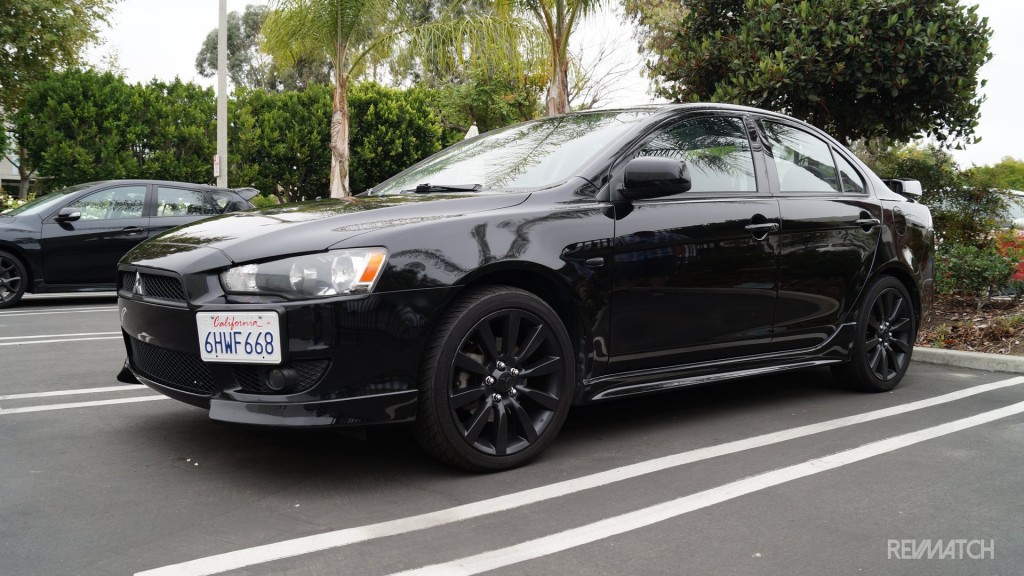 While it might not be an Evo, the GTS line of Lancers offer a surprising amount of performance at an affordable price point. Our own project GTS above has seen a few more upgrades since this photo, stay tuned for a closer look at this chassis in a future post. 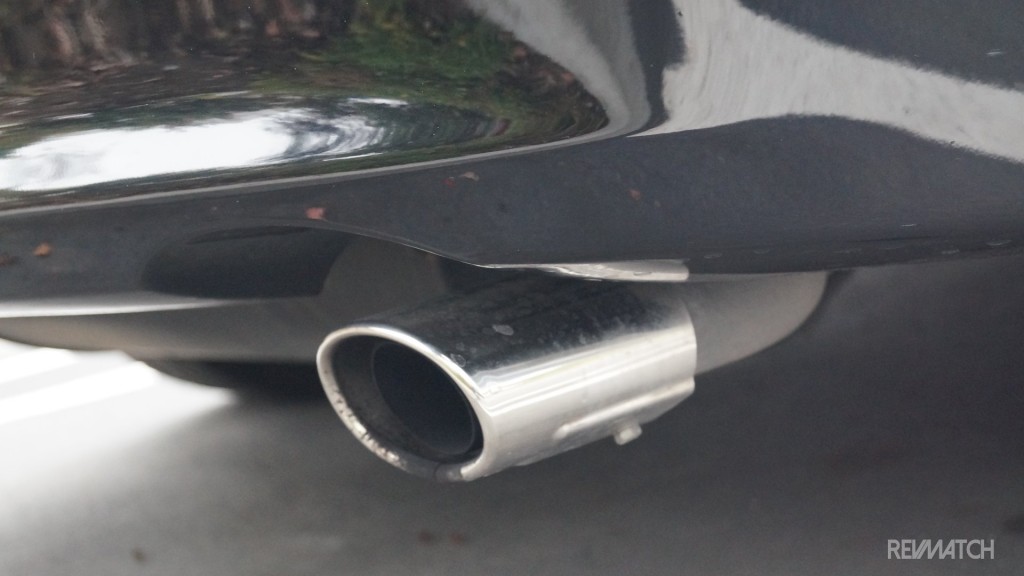 Like many new cars, our GTS was saddled with a woefully inadequate exhaust system from the factory. The stock system is a poor combination of unwanted traits. 1. Its restrictive with a 2 inch pipe diameter and numerous baffles and 2. Its heavy, tipping the scales at a portly 22.72 lbs, leaving plenty of room for improvement. It was time to see what GReddy had in store for us. 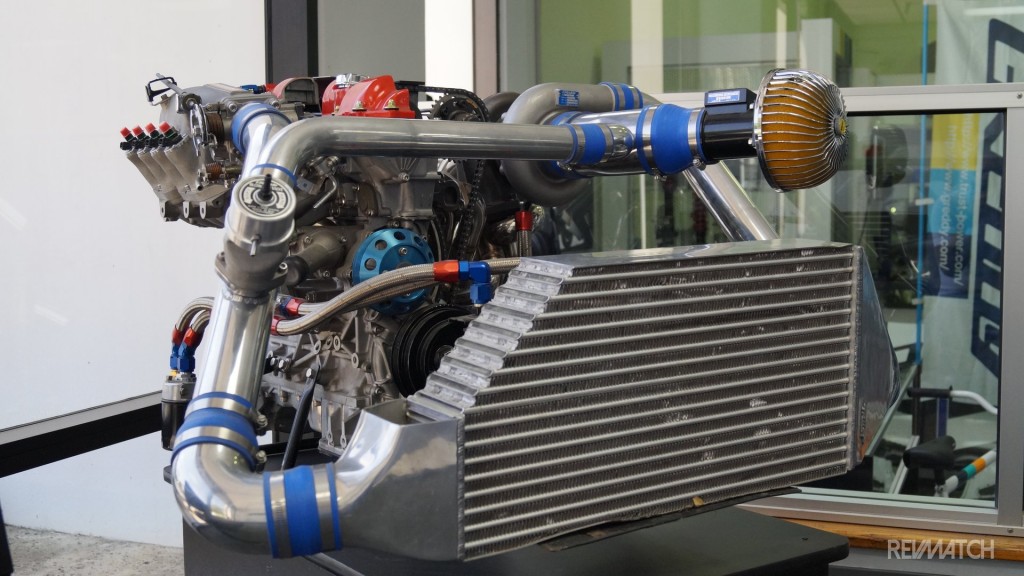 I really love visiting performance tuning shops, its always fun to see what kind of lobby displays they come up with. I have to say GReddy takes the cake with this SR20det cut away display. 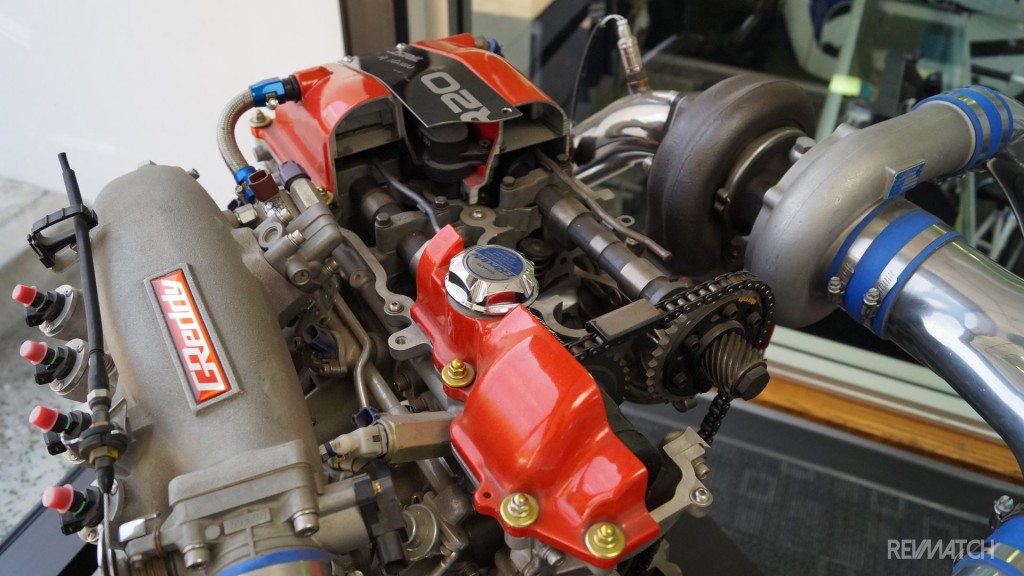 Personally i would find it hard to cut up a perfectly good engine but the end results are striking. Somewhere out there, a 240SX owner is curled up thinking about what could have been.

Since it would be a little while before they could get the car on the lift, our friend and tour guide Brian decided to show us around the shop. 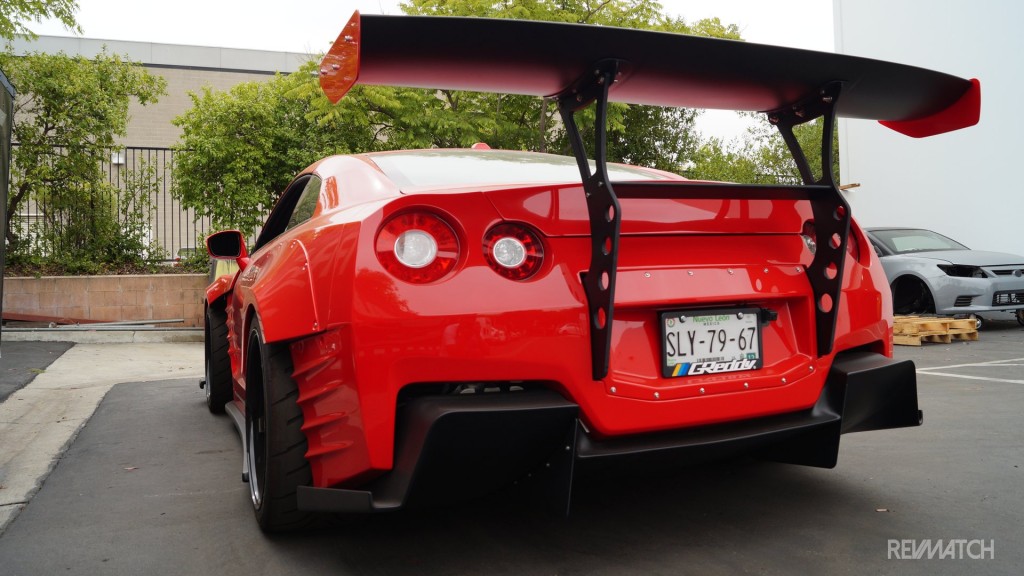 Walking through the front gates, its hard to miss the bright red GT-R with the giant rear wing. 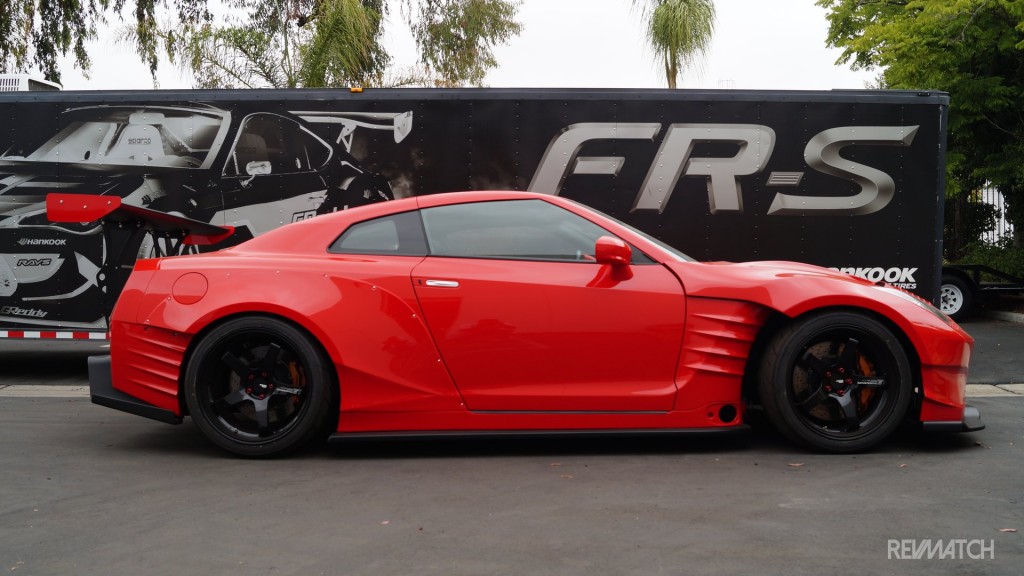 Seems like ours wasn’t the only customer car in the shop that day, though unlike our GTS which will only be here for the day, this GT-R has seen some continual development in GReddy’s care. 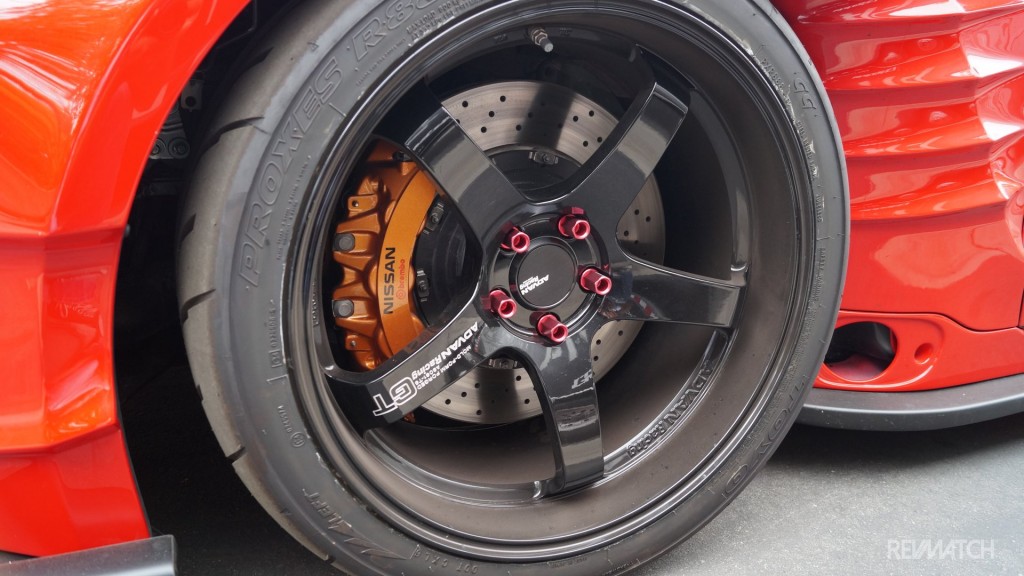 Sporting Advan GT wheels and a full Bensopra kit, this black edition GT-R is aggressive to say the least. 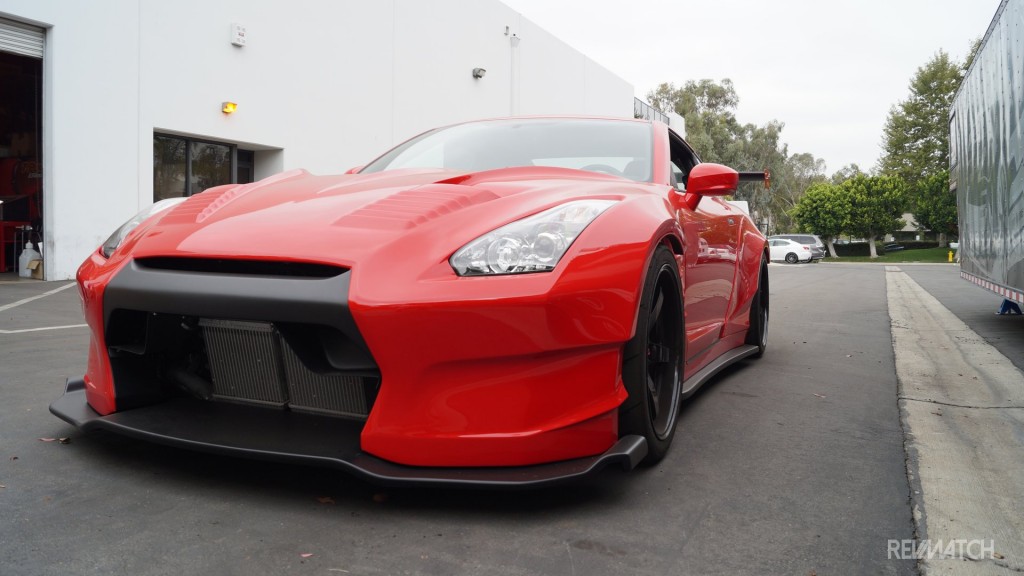 I’m so used to seeing body kits like this festooned with decals and stickers that it was refreshing to see it in this state, almost like an un-liveried prototype race car out for testing. 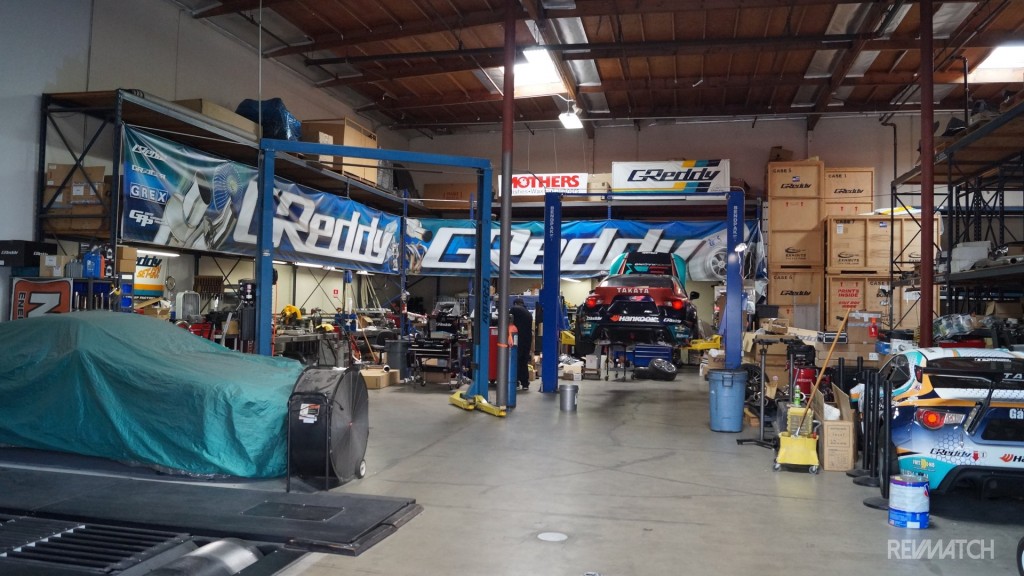 Inside the garage, many of their race cars were in for tuning or storage. 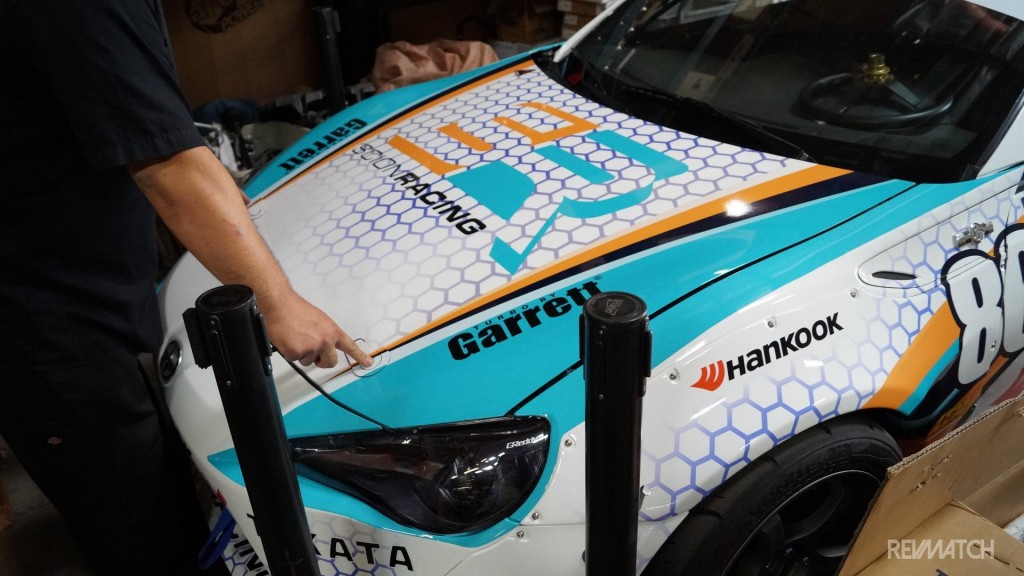 For all you Pikes Peak hill climb fans this will be a familiar sight. Ken Gushi’s Scion Racing GReddy FRS. 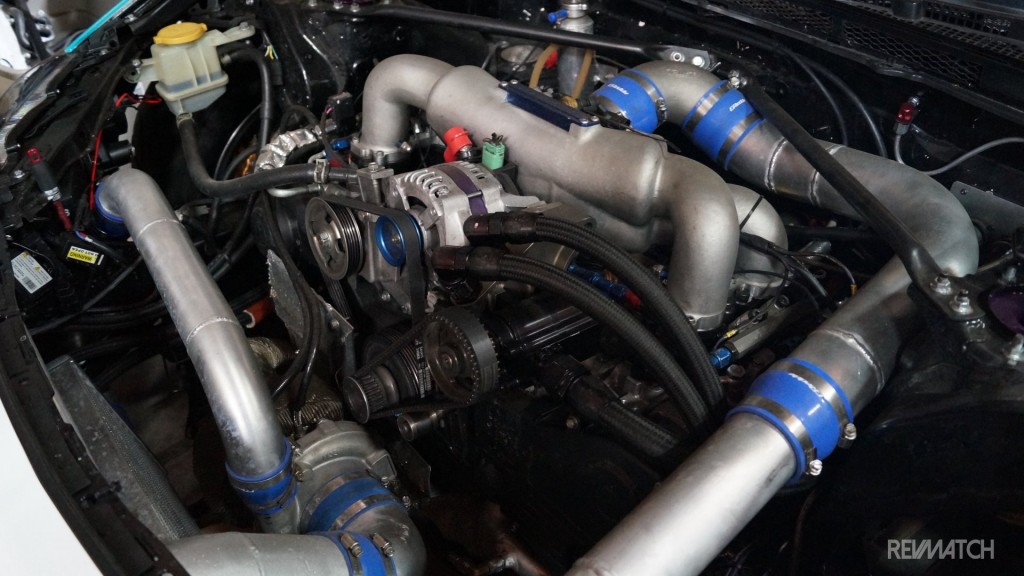 Popping the hood reveals the 500HP EJ25 that Ken Gushi is all too familiar with as this was the same engine spec he used when campaigning this car in Formula Drift. 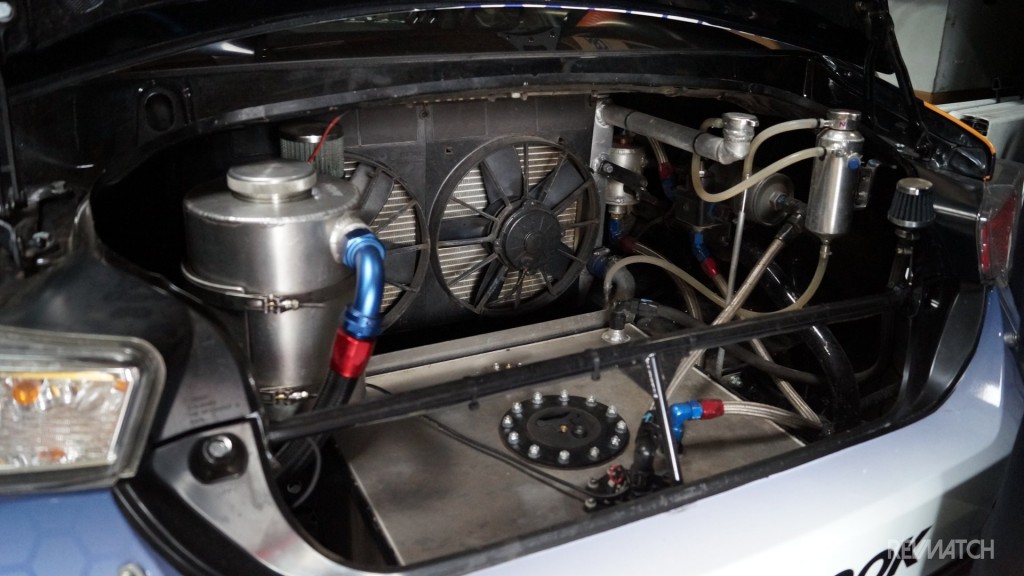 With that EJ swapped up front, some of the components were move to the trunk like the dry sump oiling system and rear mount radiator. 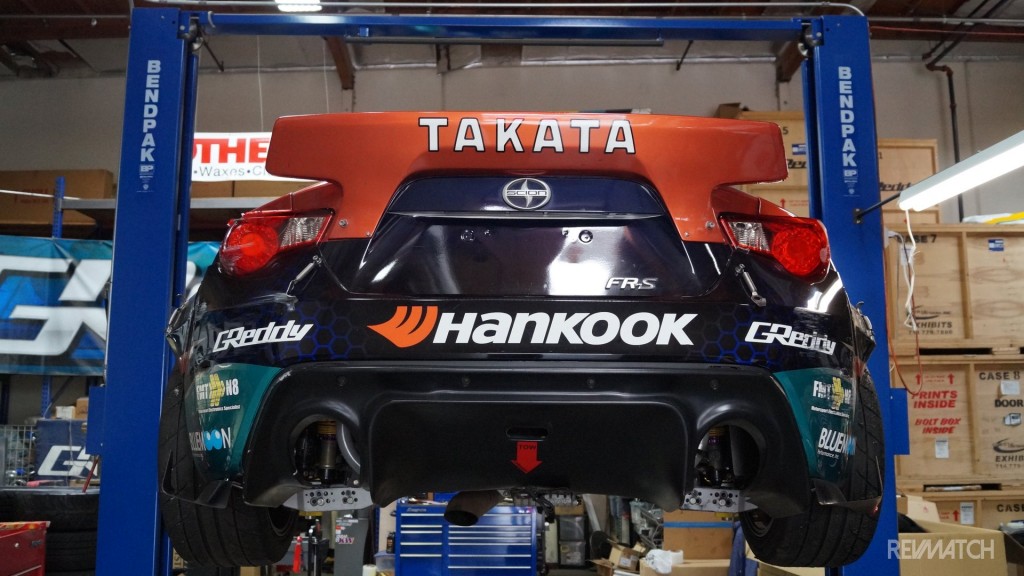 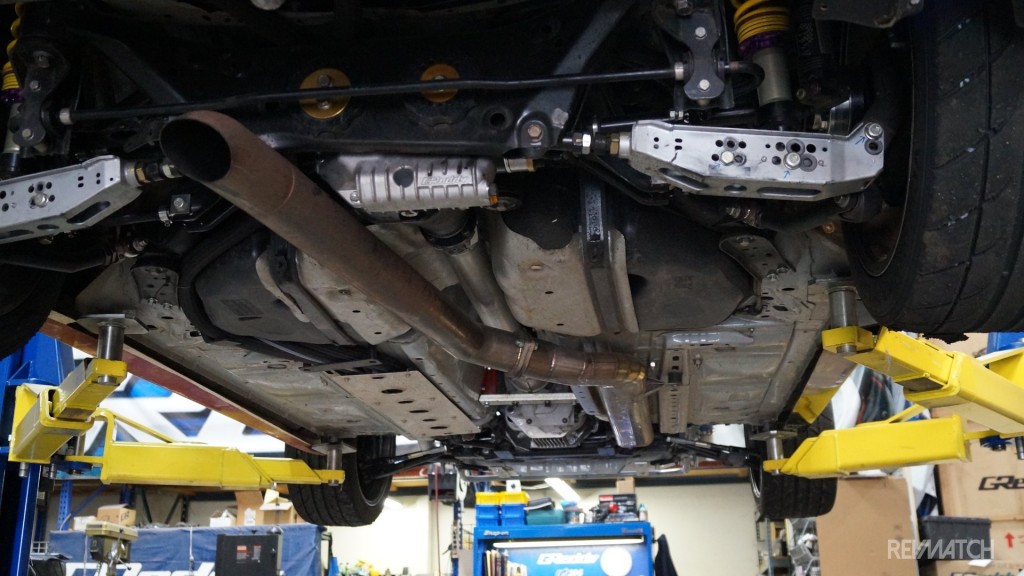 Expelling all that spent high octane race fuel is this custom straight pipe exhaust. The sound this must make is sure to get the crowd going at any drift event. 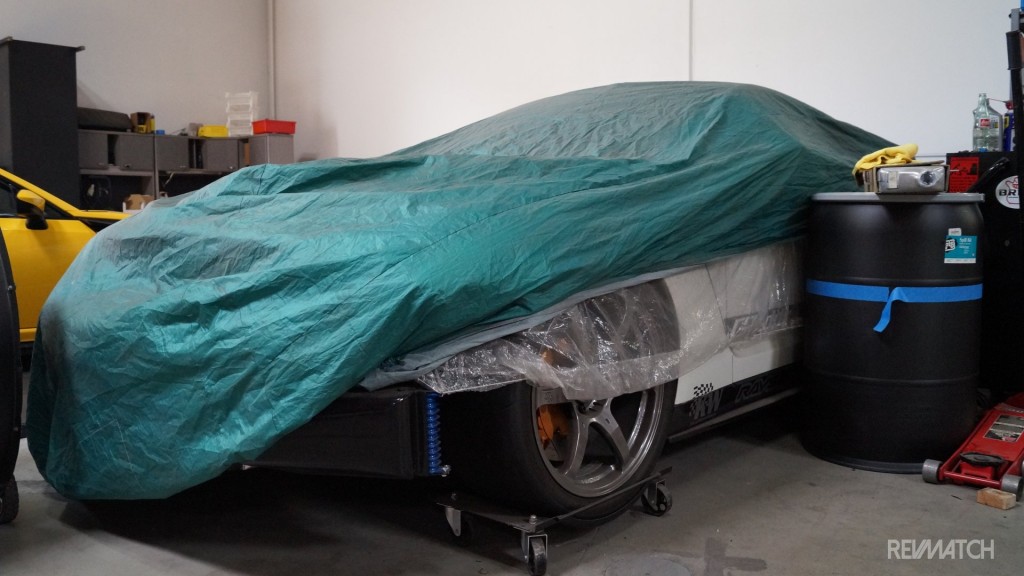 Hiding under the sheet from the earlier shot was something very special. Back when the GT-R first came out, everyone was scrambling to get their hands on it, performance companies especially. As soon as GReddy got their hands on this model, it was under the development knife receiving their newest and biggest stroker kit option, the GR43, which increased displacement from 3.8 liters to 4.3. That extra half liter of displacement and other supporting mods helped boost the car’s power output to 900 bhp and 750 lb-ft on pump gas, an impressive feat for the then new platform. It was hinted that we may once again see this car in a new iteration in the near future so we will be sure to keep an eye on it. 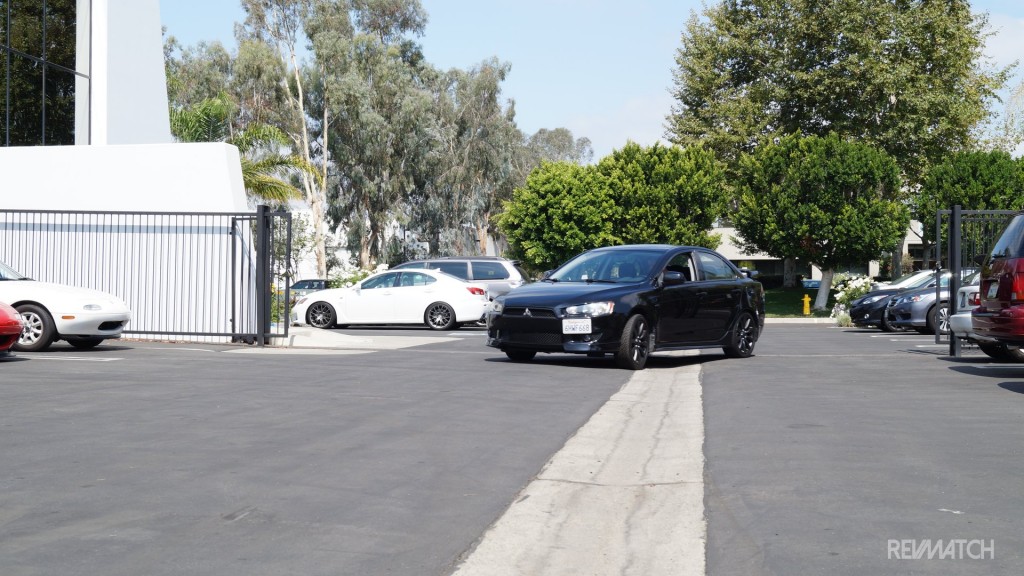 Soon it was time for our GTS to head into the GReddy garage for its own development. 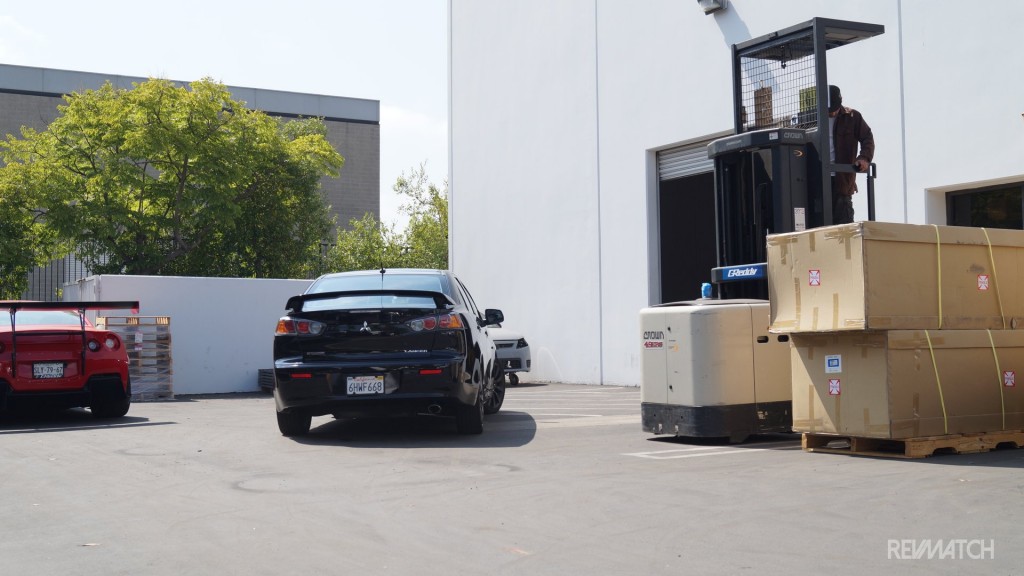 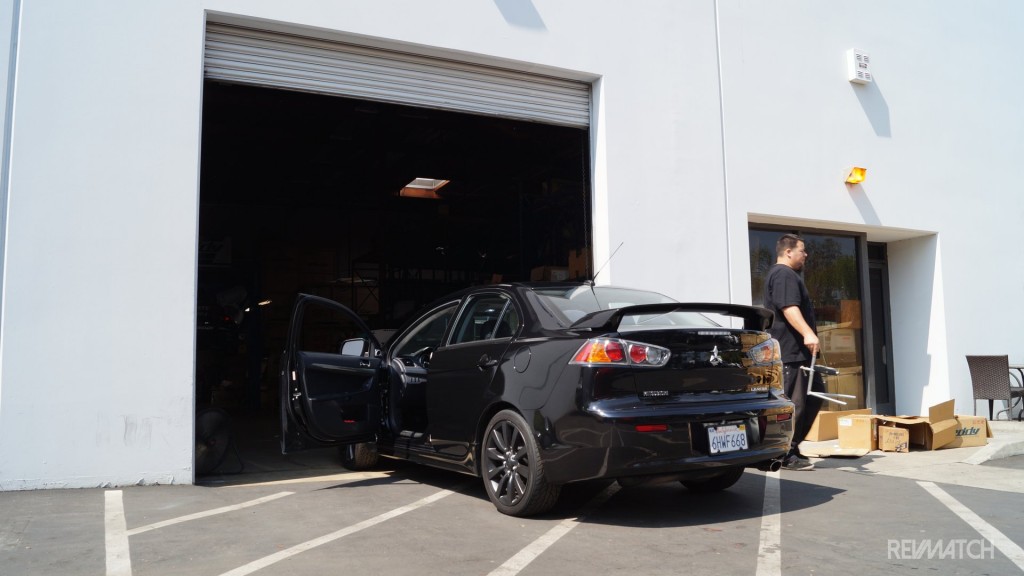 Since they were testing both the Supreme SP and Revolution RS on the car we were told it may take a few hours, so we left it in GReddy’s capable hands and grabbed some lunch.

Upon returning, we instantly knew the results were well worth the wait. 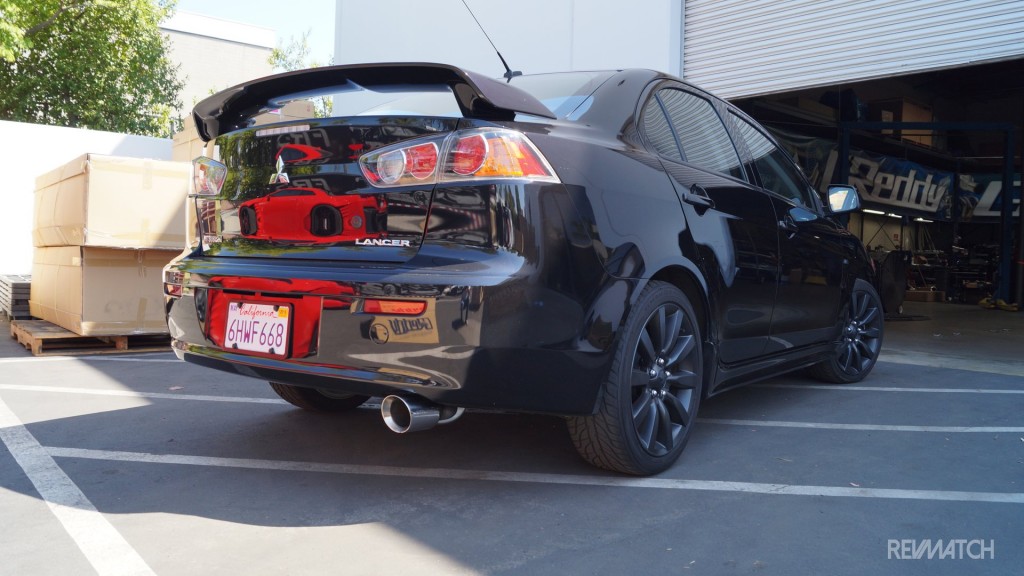 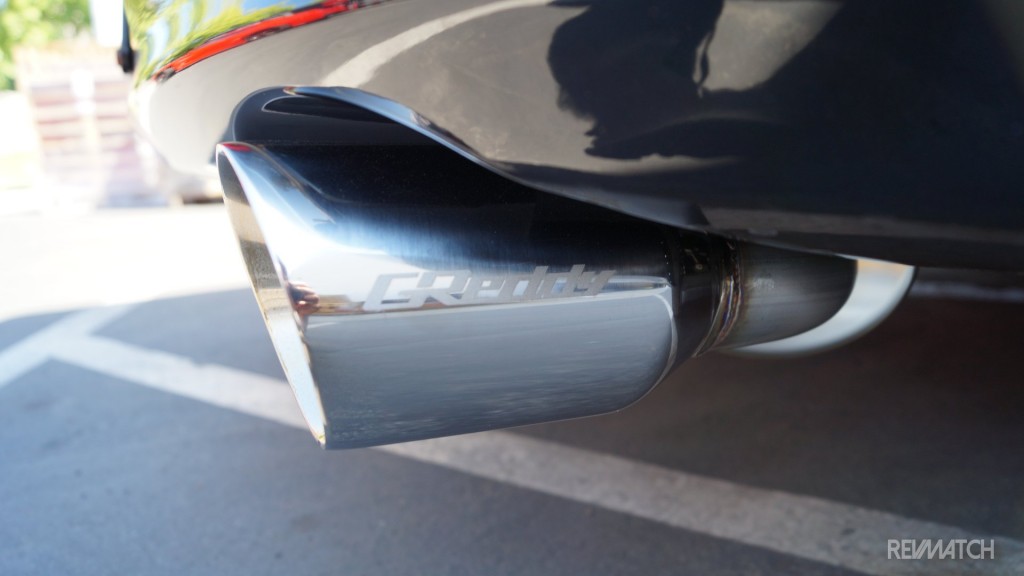 Compared to the dull, flappy exhaust note more associated with industrial equipment from the stock exhaust, the new 2.5 inch Supreme SP produces a smooth yet aggressive exhaust note across the rev range. Definitely a better match for the GTS’s more sporting nature.

Along with the auditory improvements, the new Supreme SP weighs in at 10.6 lbs, bettering the stock system by 12.15 lbs, while the featherweight Revolution RS takes that a step further, shedding 13.22 lbs against the stock exhaust. While many will argue whether axle-back systems improve horsepower or not, there is less doubt on the benefits of weight reduction. Dropping more than half the weight off the old system and Improving our power to weight ratio is always a positive in my book.

After hearing what a difference the new Supreme SP line made for our GTS, we couldn’t wait to hear what the more aggressive Revolution RS could do. Unfortunately this was not to be. In what would seem like a small detail that many other companies would simply deem “good enough”, the fitment and engraving was just not to the standard level of quality for GReddy and thus went back to R&D for correction. We would later return to GReddy to complete testing of their Revolution RS exhaust, which we would go on to use for Project GTS. 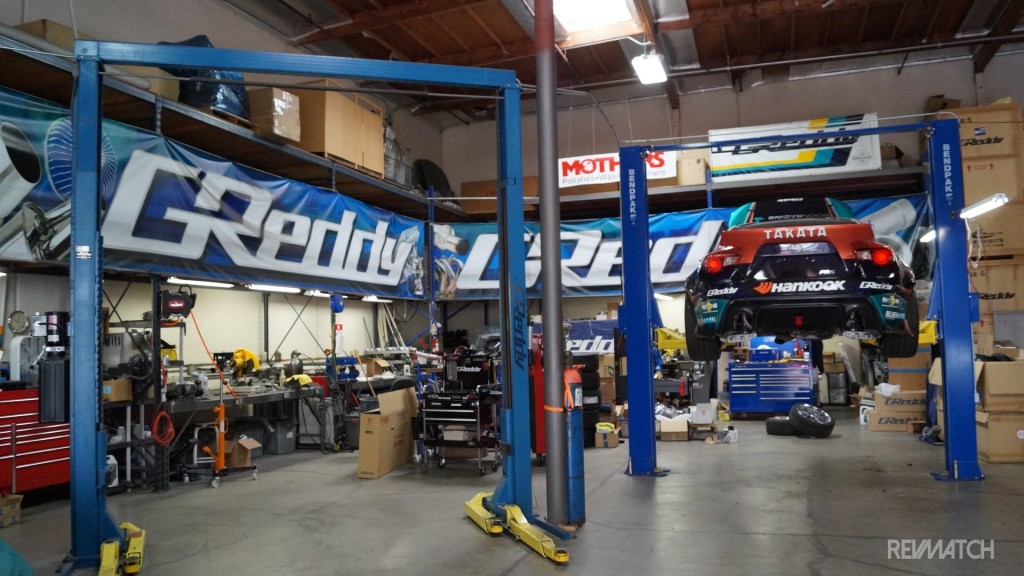 Throughout the day, this was a reoccurring theme at GReddy. No matter what it was, whether its building a six figure race car or prepping a three figure exhaust, there was always a mentality of “If you are going to do something, you do it right”. While many questionable products are entering the market, it was encouraging to know that there are still companies like GReddy that place an importance on quality and integrity.

It is because of this unyielding pursuit of perfection and quality that we are proud to announce, in partnership with GReddy Performance Products, two special group buys on Revolution RS and Supreme SP axle-back exhaust systems for both the 2008-2011 Lancer GTS and 2012-2015 Lancer GT. Click the link below for more info.