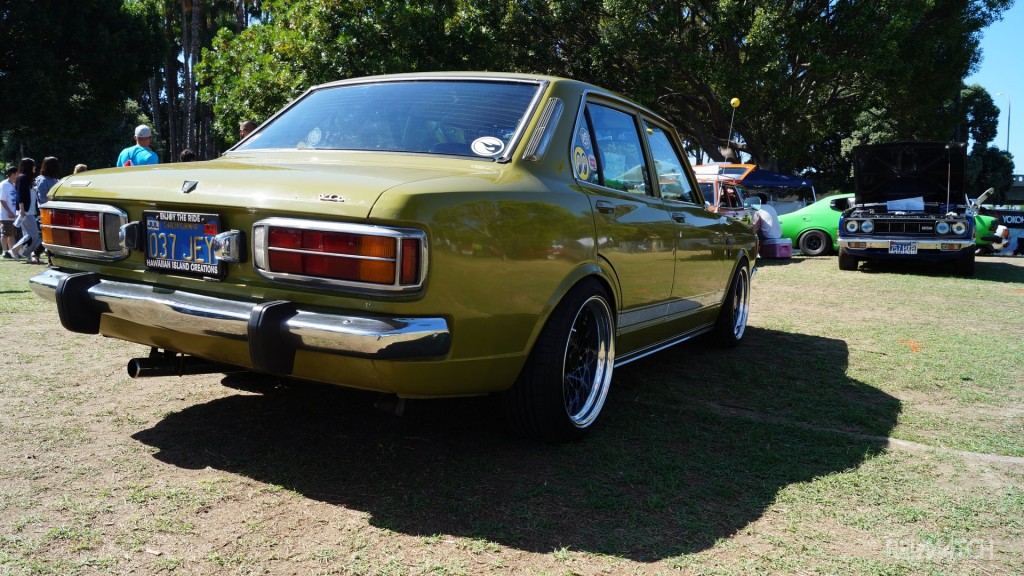 Sun, Surf, and J-Tin (or maybe that’s rust?). Yup, its that magical time of year where the country’s best Japanese classics converge on the shores of Long Beach to celebrate all things Kyusha (Japanese old classic car). In its 11th year of running, JCCS is proving the Japanese classic car community is not only thriving but attracting attention on a much larger scale. 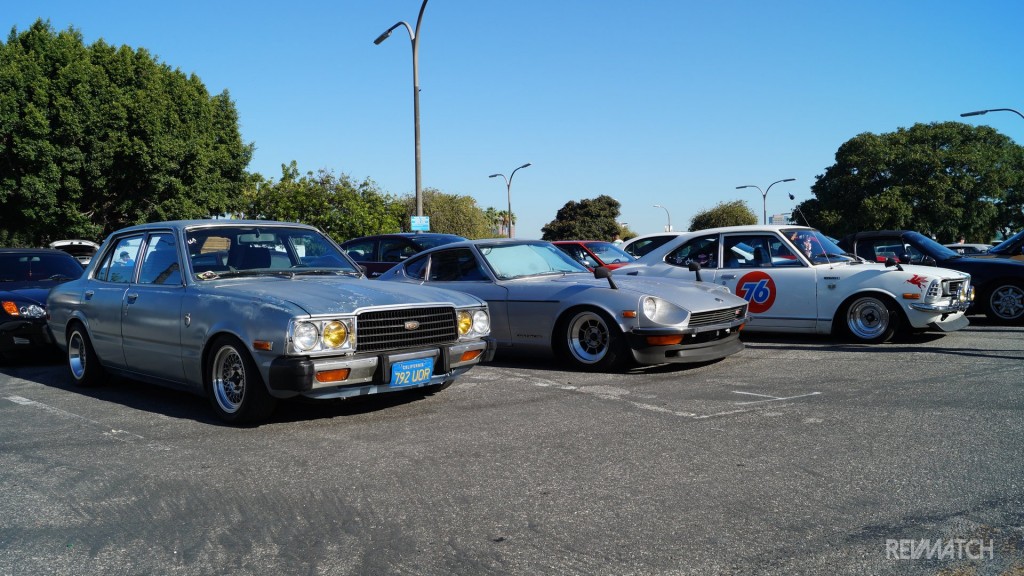 For those of us seasoned regulars to the show know that parking at the event quickly becomes a precious commodity, with many feeling that the event has outgrown the venue. Let just say spots filled quickly. Luckily those die-hard enthusiasts are usually the first ones there which makes for some very interesting stable mates like the 3 above. However, it was the TE27 corolla that really caught my attention.

Everything, from the aggressive drop, well appointed decals and custom front chin spoiler told you that this was a car built to extract the maximal amount of driving enjoyment. 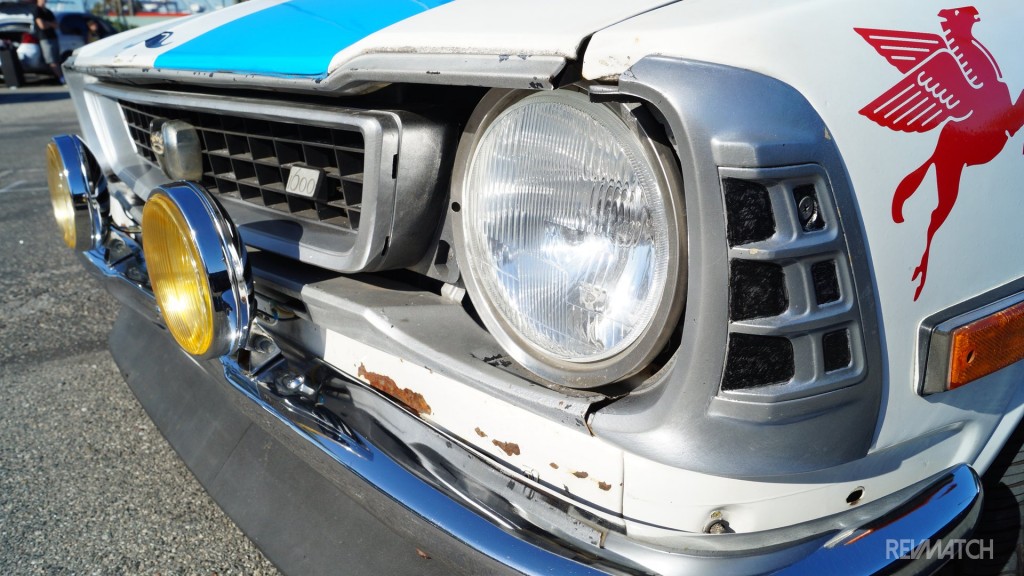 I feel that many times we focus so much on perfection that we tend to overlook the beauty and honesty that comes of imperfection. Sure this car may have a few rough edges and a rust spot here and there, but cars like these are much more than the sum of its parts. They are personalities we get to know better every time you get behind the wheel. 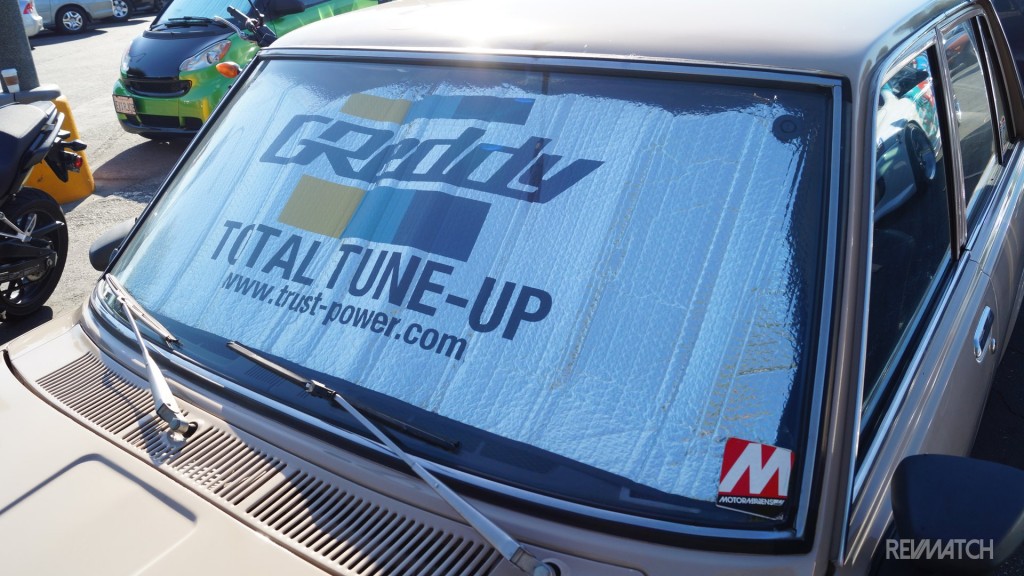 There were definitely some envy inducing parts on display in the parking lot, I will seriously be on the lookout for one of these on Yahoo Japan Auctions. 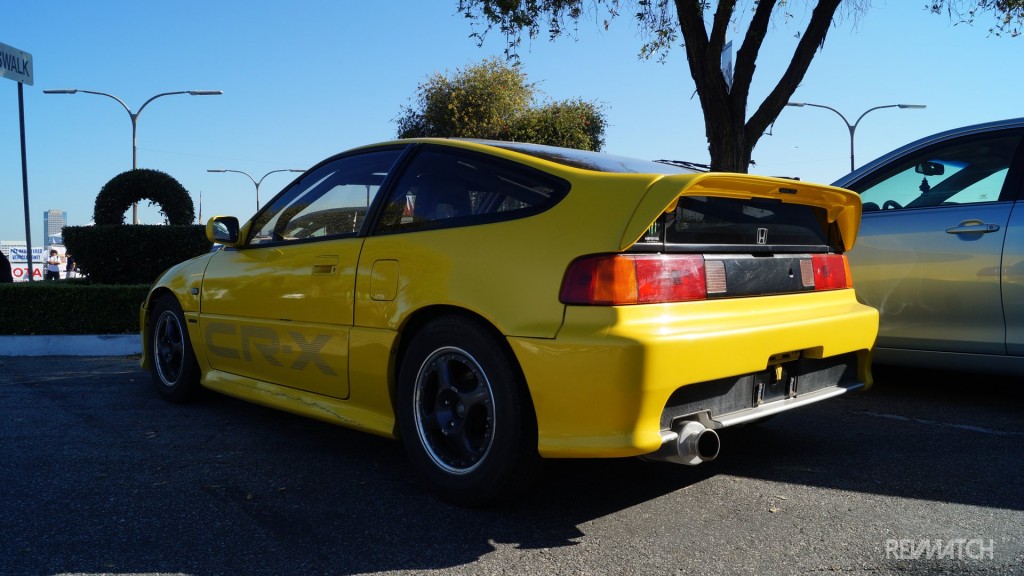 I could have honestly spent almost the whole day gawking at the cars in the parking lot, like this Mugen laden RHD CR-X, but it was a mere hint of things to come. 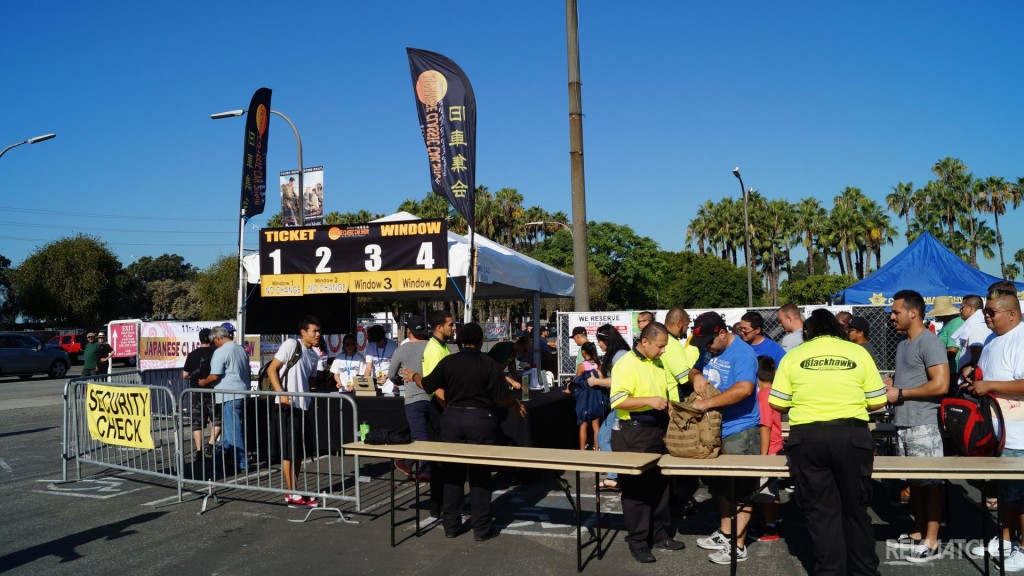 Now over the past few years, JCCS has had its fair share of criticisms. From limited parking to the car selection process, I have tried to keep an open mind to, but this ill-advised decision to hire “TSA” levels of security for a car show is a cavity search too far. After this was enacted at last year show, I was hoping that rational minds would prevail in returning to a common sense levels of screening but it was apparent that this was not the case. 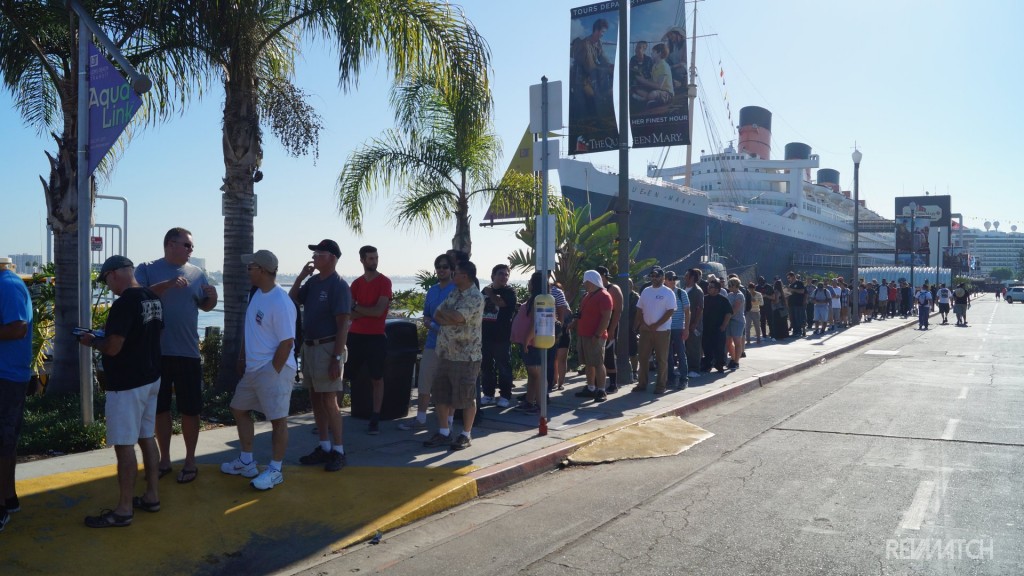 Looking at this year’s line of people, you could definitely tell there was a marked increase in interest in these cars. The wait was a little longer than usual but a body scan later and we’re in. 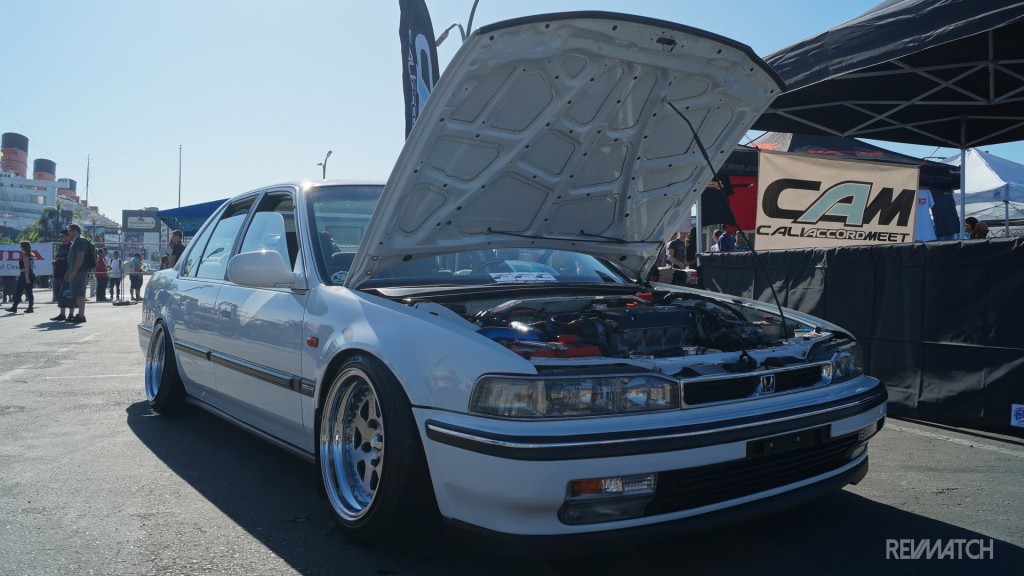 Right out the gate, one of the first cars to catch my eye was this very clean CB7 accord on Mugen M7’s 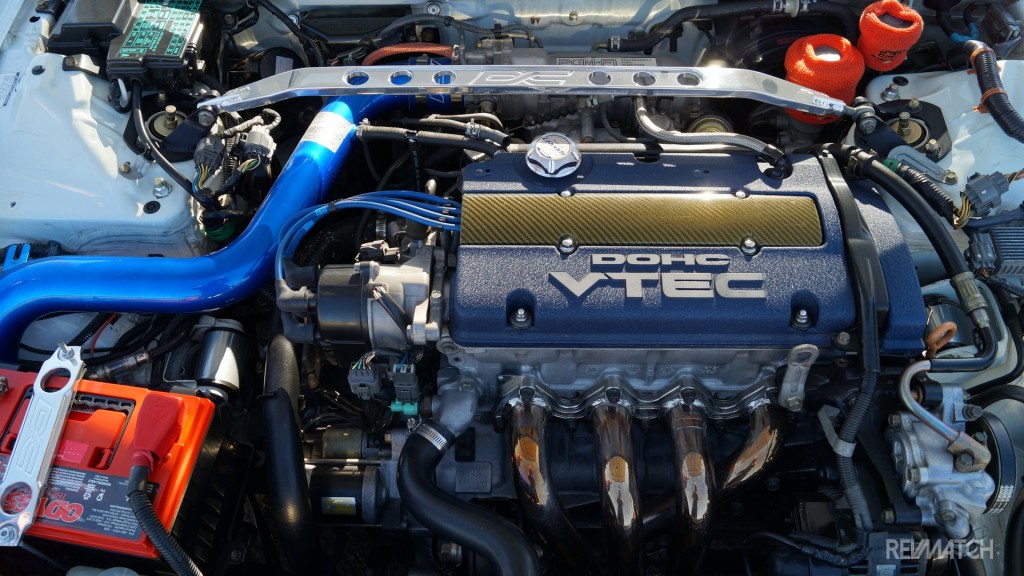 With an equally clean H22 swap running some very choice parts like that stainless GReddy manifold. Such a great combo,honestly Honda should have made them this way.

2015 is a very interesting year for JCCS. For many, 2015 heralds in a wave of cars not typically considered JCCS material but under the 25 year rule, many of these cars like the CB7 accord above are now classified as classics. While I do understand that a lot of people feel these cars deviate from the original intentions of the show, we should consider that there was a time that our classic Datsuns, Toyotas, etc didnt have the recognition it has now and that cars of this vintage are now coming into their own. I think if JCCS keeps the selection of newer classics to a high level of quality like this Accord, we will see a more inclusive reaction from the classic J-Tin community. 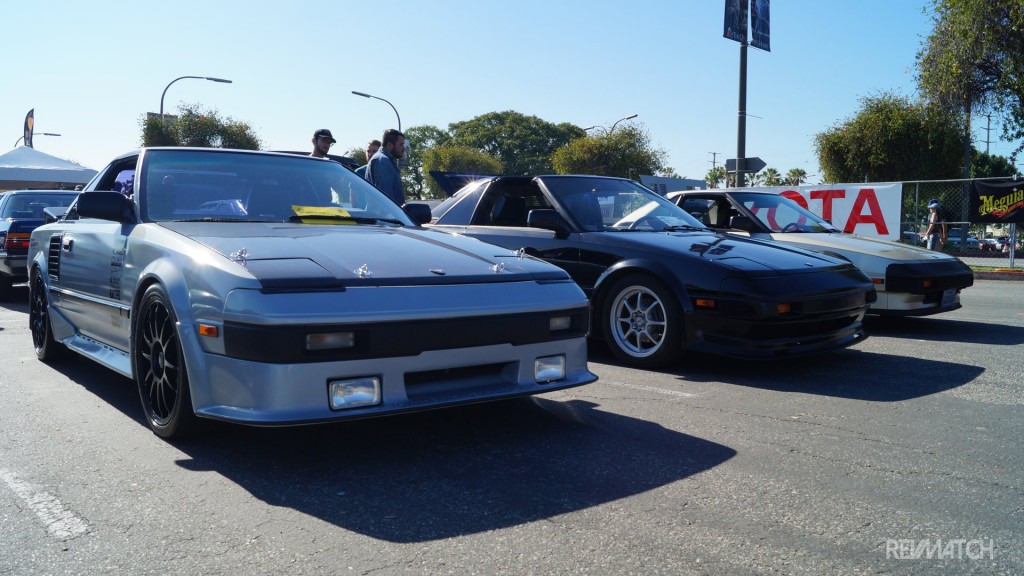 There were plenty of other neo classics there like this tasty selection of Toyotas. Loved these AW11’s in all their angular 80’s glory. 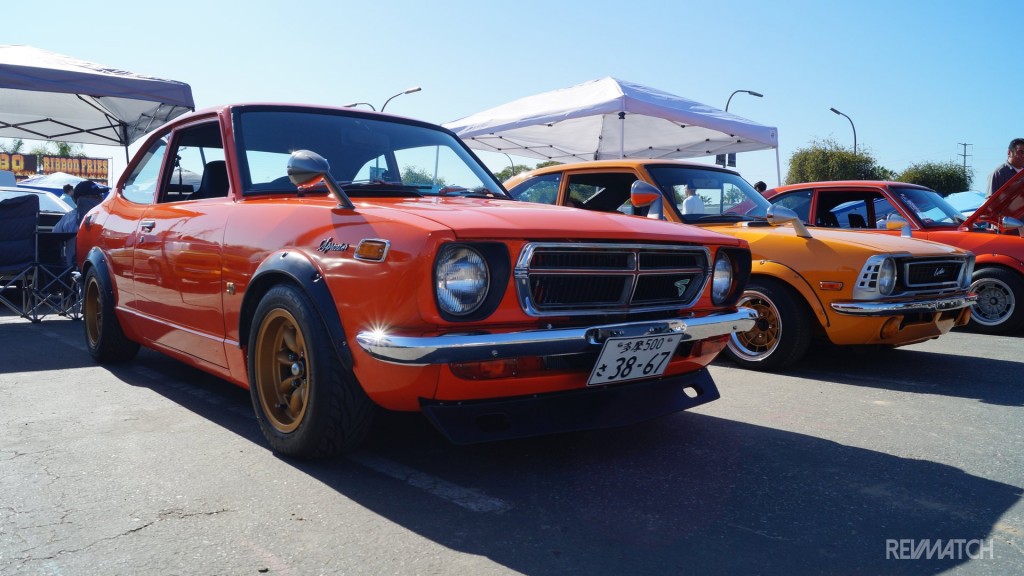 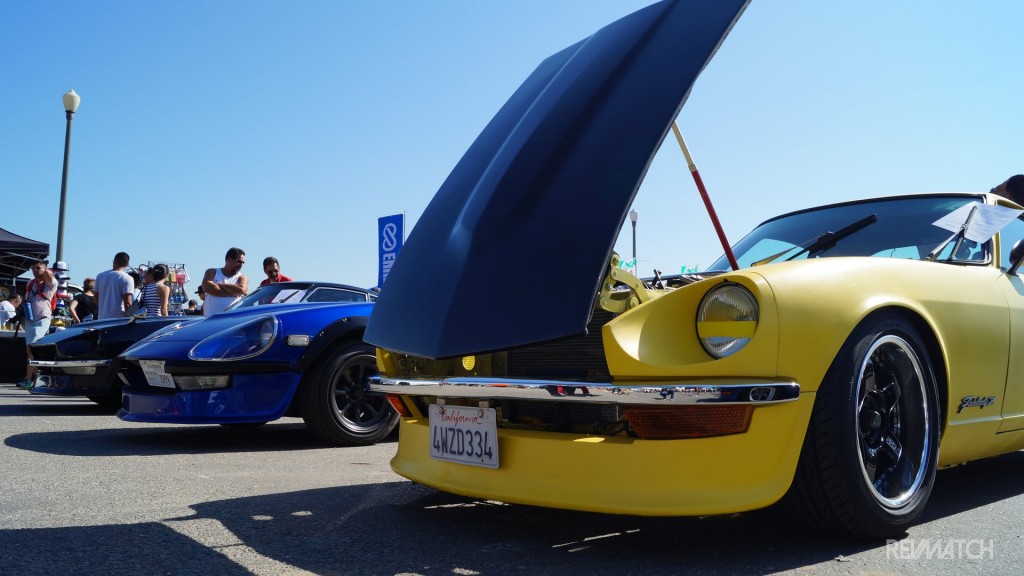 There were also plenty of ladies in attendance. 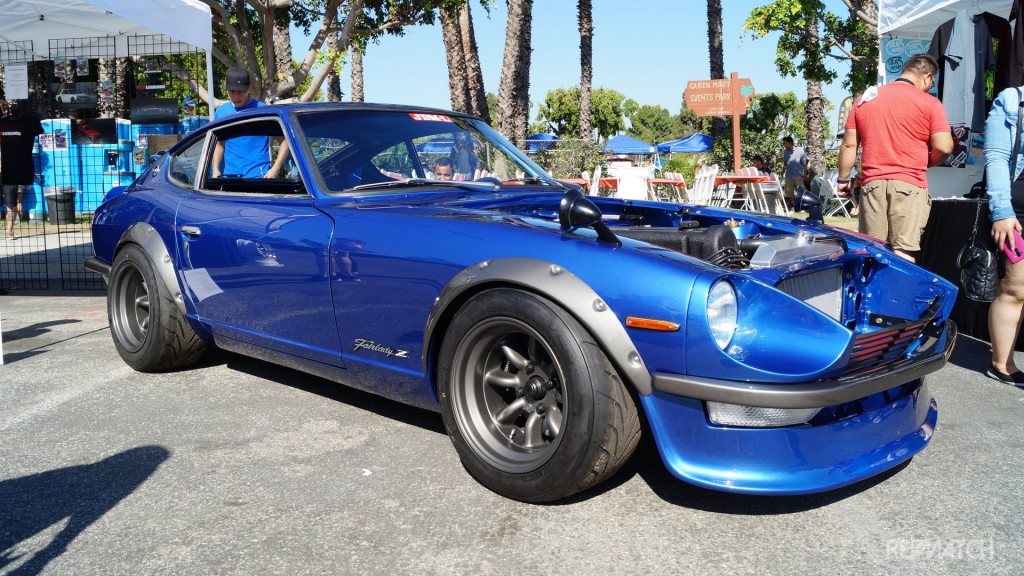 Down at the JDM Legends booth, there was a sizable crowd gathered around their latest kyusha beauty. 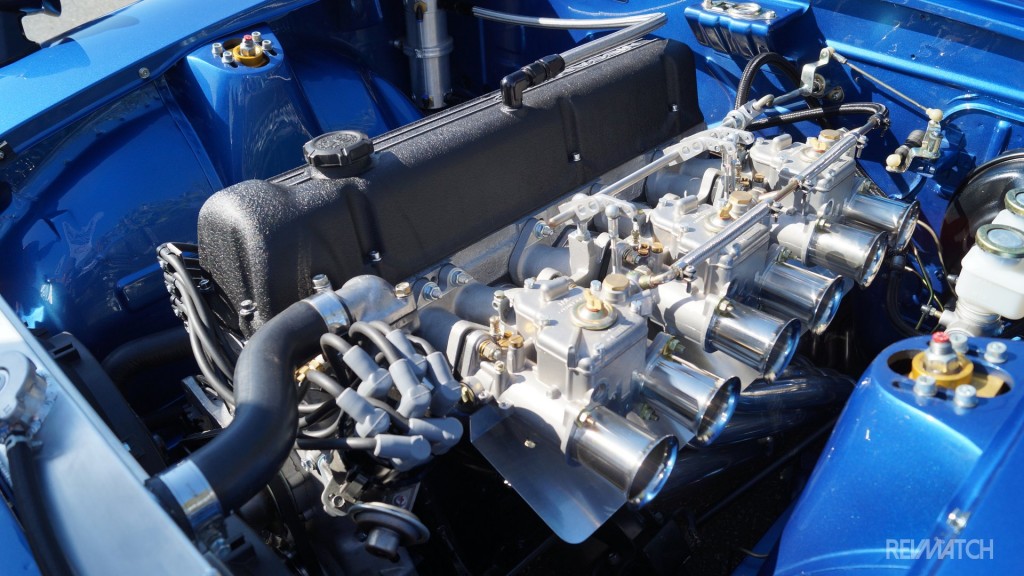 The man behind the machine. This being on of their most intensive build to date, Eric from JDM Legends was more than happy to go over all the fine details that went into this build. Compared to the rusted out rolling shell it started as, it was a night and day transformation. I have to say, it was really inspiring to talk to someone so passionate about the work that they do. Can’t wait to see what Eric and the JDM Legends crew have up their sleeve next. 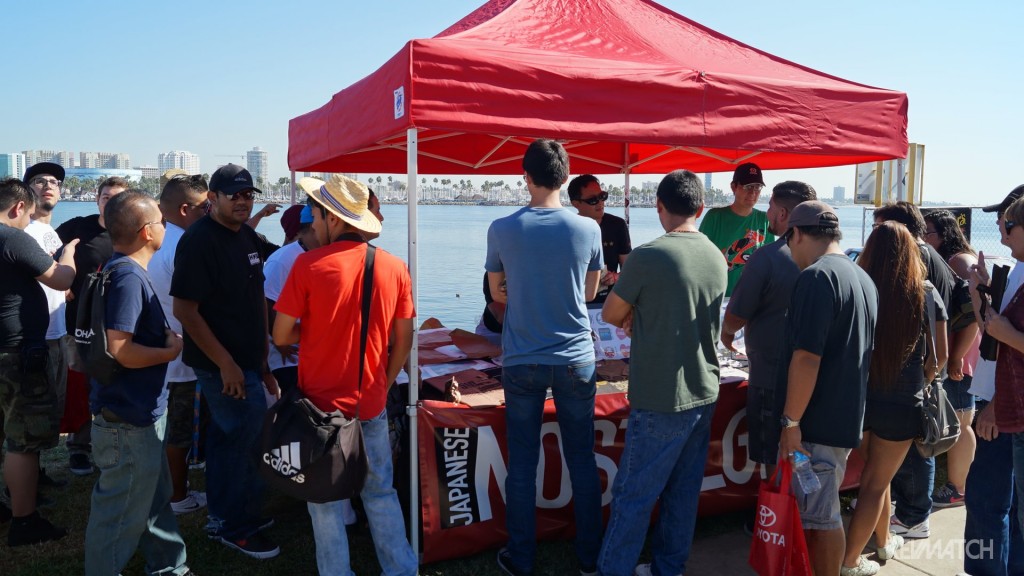 Every year I always make it a priority to swing by the Japanese Nostalgic Car booth as they always has something special line up for JCCS, and from the looks of the mass of people waiting, it had to be something especially good this year. 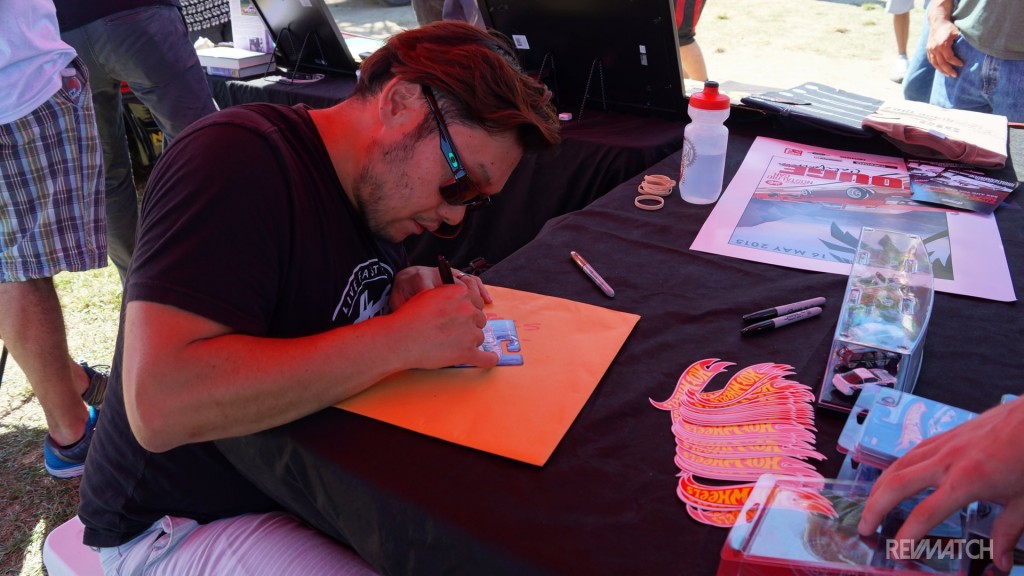 And indeed it was. This year JNC teamed up with Hot Wheel designer and classic car enthusiast Jun Imai for a special release and signing of his limited edition Hakosuka skyline illustration prints. 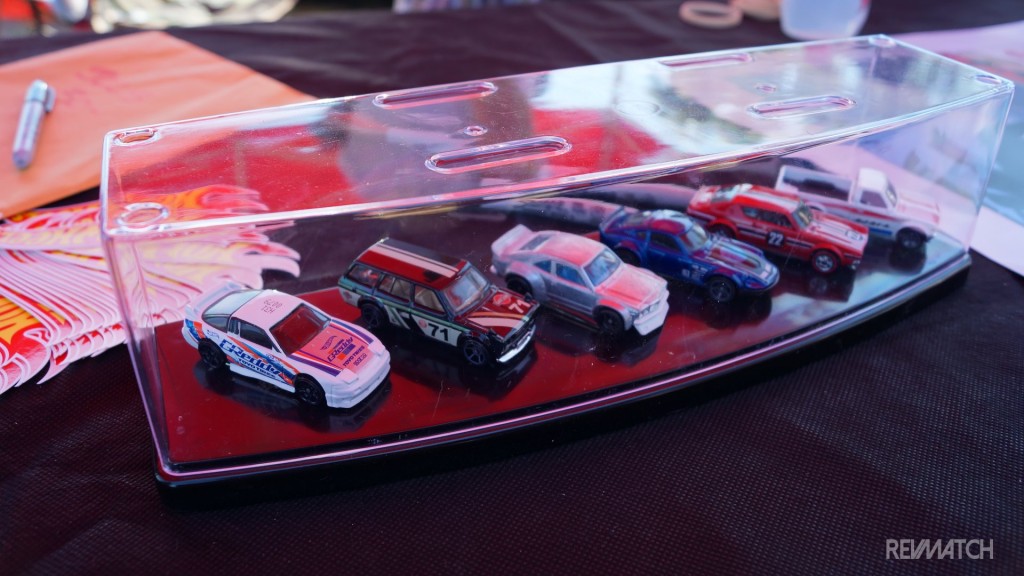 Jun has been a driving force in getting many of our your favorite japanese classics immortalized in die cast form. From RX-3’s and Kenmeri Skylines… 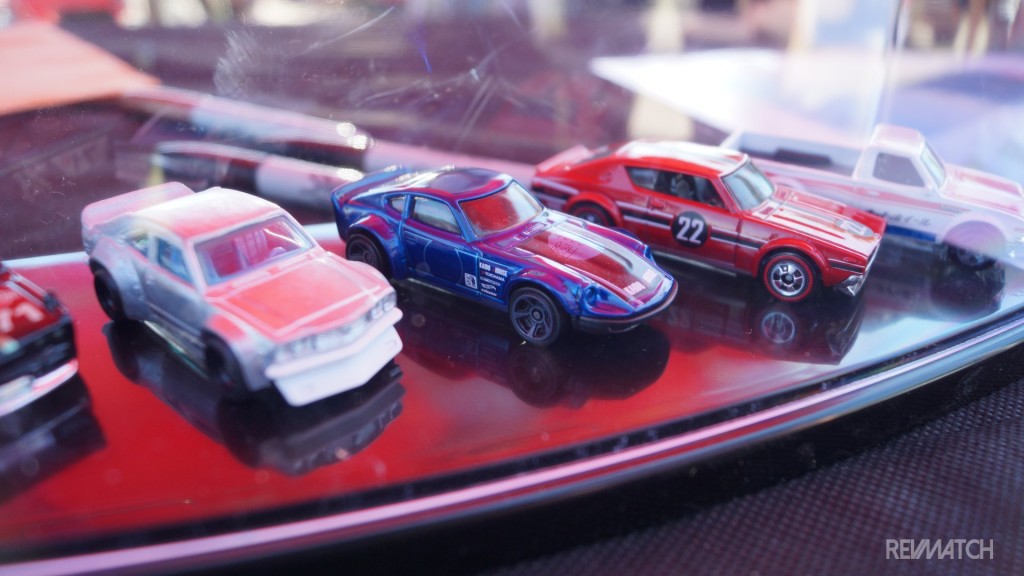 to a suspiciously familiar G-nosed S30. Must be nice to having keys to the Hot Wheels factory lol. 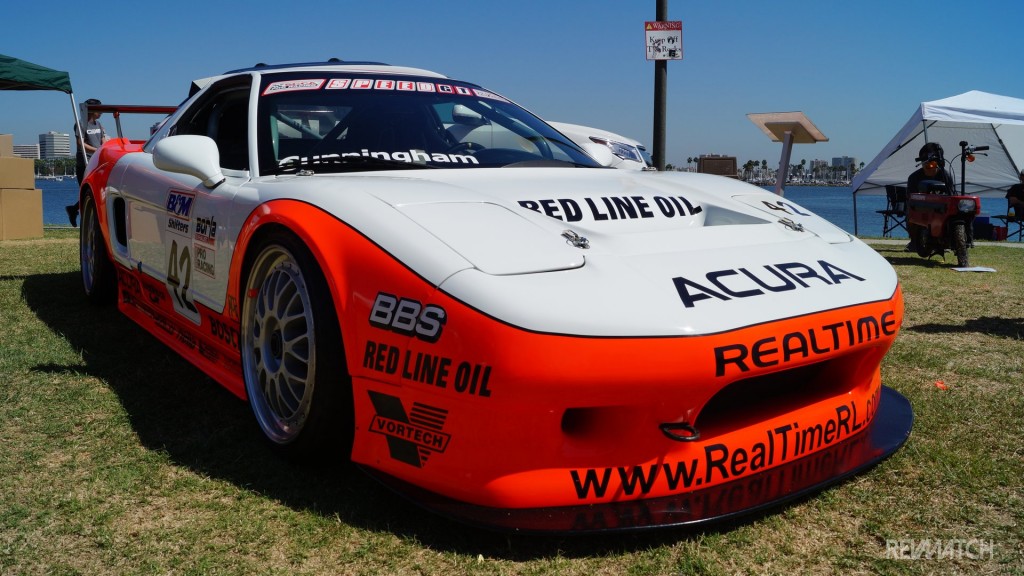 Another exciting revelations to happen over the years has been the increased involvement from major auto manufacturers. Honda was doing well to remind us of their proud racing heritage with this World Challenge GT RealTime racing Acura NSX. I loved watching this car on SpeedVision battling it out on the track with that screaming supercharged V6. 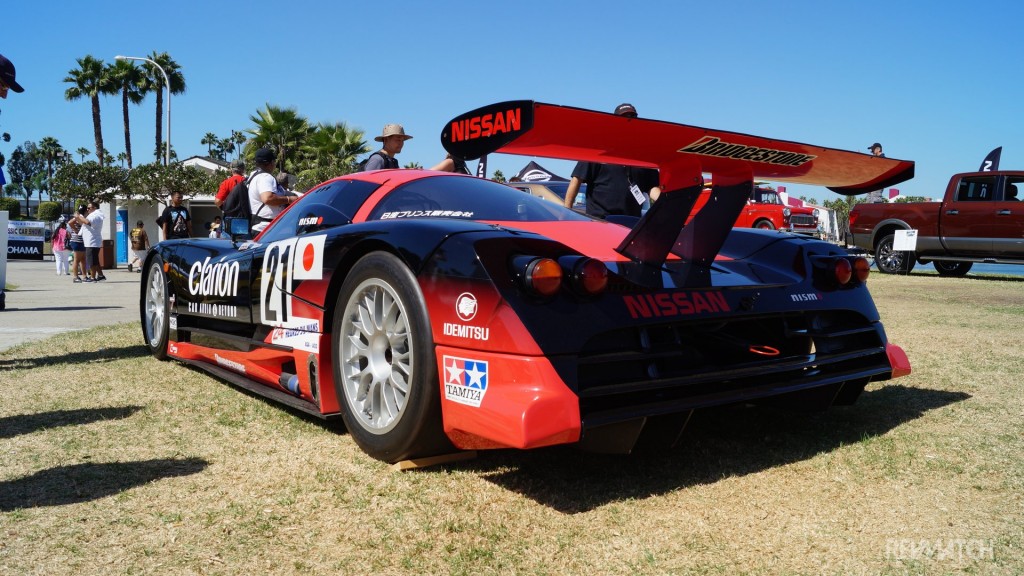 Nissan was the newest addition to the line up of official JCCS manufactures and wanting to make a good first impression, brought out this beautiful R390 GT1 LeMans racer.

For me it wasn’t the fact that this was a super rare race car, or the fact that homologation rules meant that there are only two road legal versions of this car, each with million dollar price tags, in the world. No, it was the fact that I was standing right next to the car that I spent nearly a whole summer vacation trying to win in Gran Turismo 3. I remember every time I would watch the randomized prize wheel spin with anticipation and every freaking time it fell on that damn Toyota GT1 race car or Viper GT car. AHHHH! But finally after countless plays and numerous Toyotas sold off to craigslist (It ran when parked, I swear.), I finally won my baby blue Calsonic R390 GT1 and proceeded to wreck shop on the rest of the game. Hmm, I think its time to fire up the old PS2 and take her out for a few hot laps. 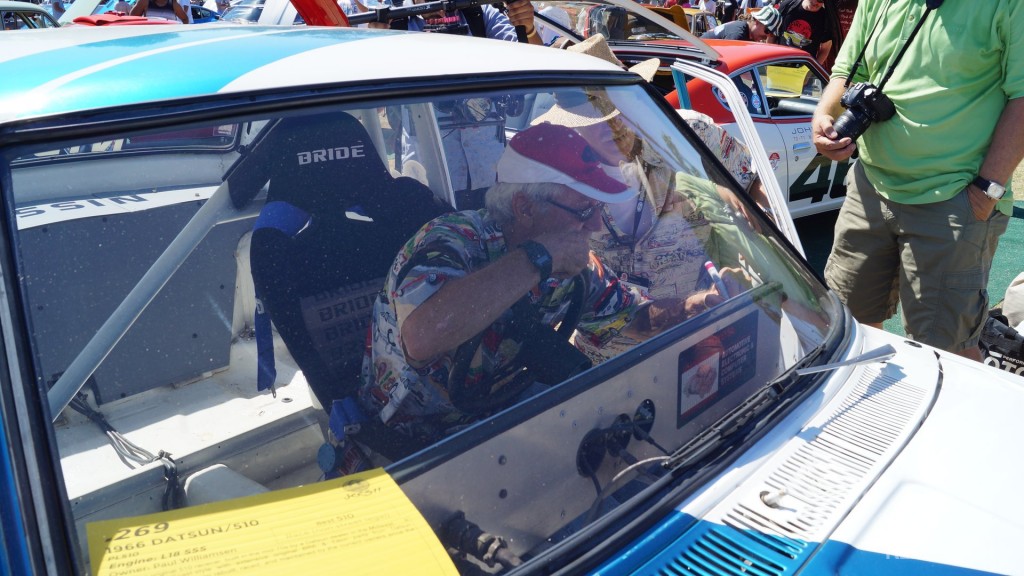 The R390 wasn’t the only racing legend in attendance. 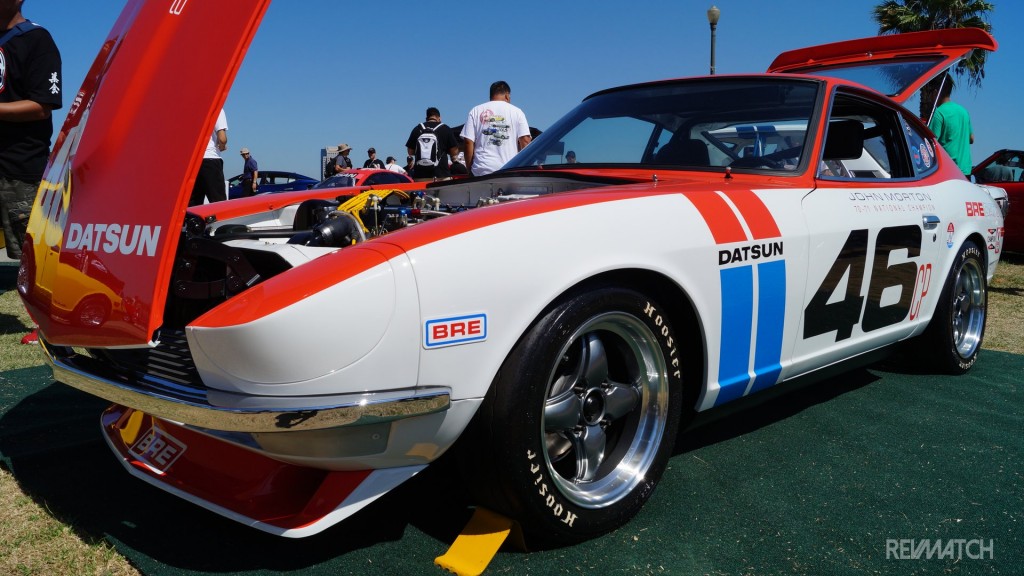 Thanks to race car driver John Morton and the beautiful 240Z above, Datsun/Nissan was legitimatized as not only a competitor but a dominate force in American racing that would span decades of victories and numerous trophies. 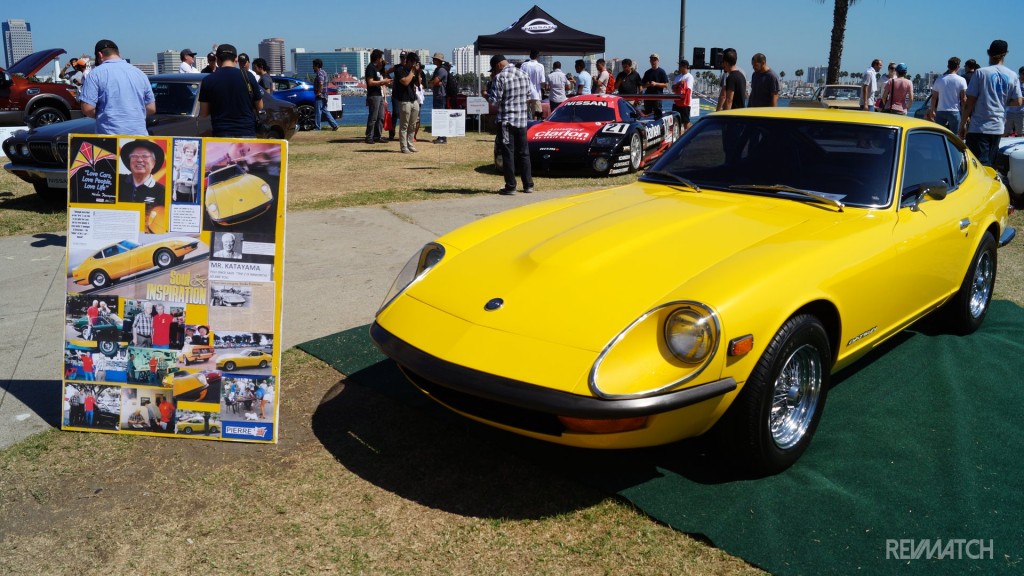 But none of this might not have happened had it not been the unyeilding efforts of Mr Yutaka Katayama and his team at Datsun/Nissan America during its formative years. Mr Katayama passing earlier this year was a heavy blow to many in the Japanese classic car community but his lessons of determination and enthusiasm endures. Love cars! Love people! Love life! 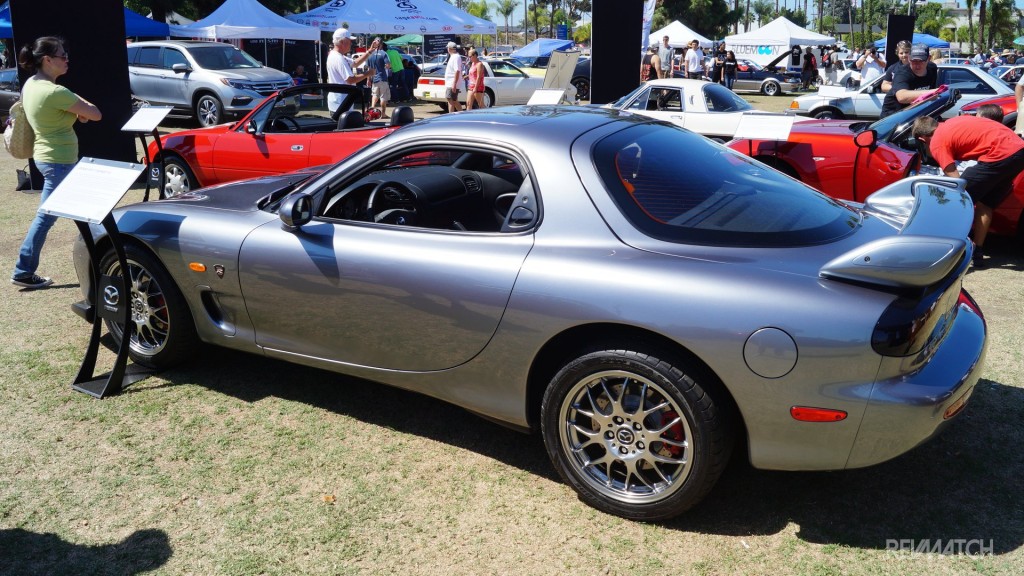 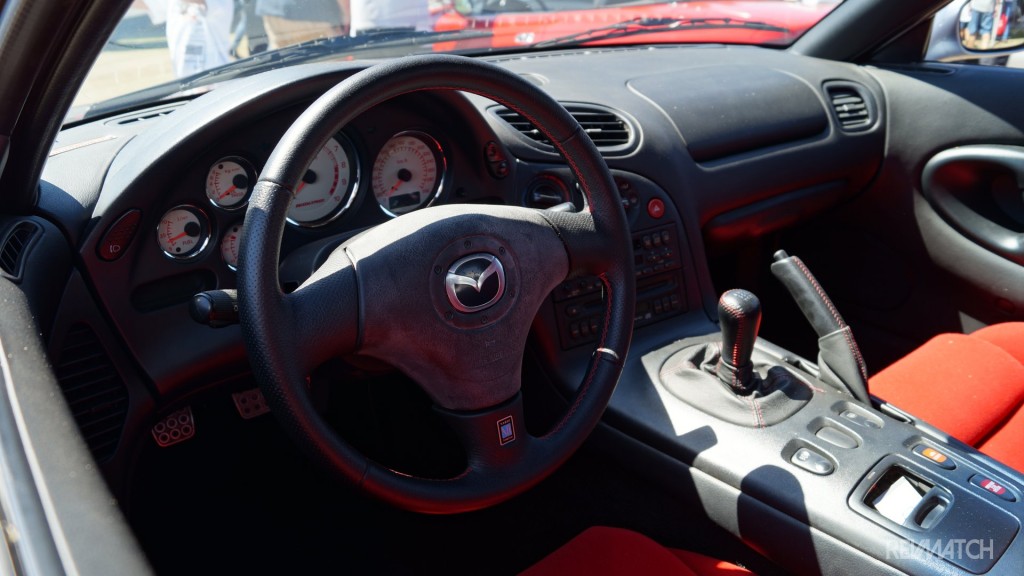 Hmm, I’m pretty sure these things came with the steering wheel on the other side of the car. Turns out the story behind this car is that here in the states, tightening emissions standards effectively killed off the RX-7, but in Japan the RX-7 continued on for many years after. As a last hurrah before the release of the RX-8 in its home market, Mazda Japan released the ultimate final RX-7, The Spirit R. Unfortunately we would not know the joys of the Spirit R here in America. Then one day a mysterious container shows up at Mazda North American Doors. As a final gift from the longtime RX-7 project manager Takaharu Kobayakawa to Mazda North American operations VP Robert Davis, Mazda North America had everything they needed to build the world’s only LHD Spirit R RX-7 that you see before you. Such an amazing tale. 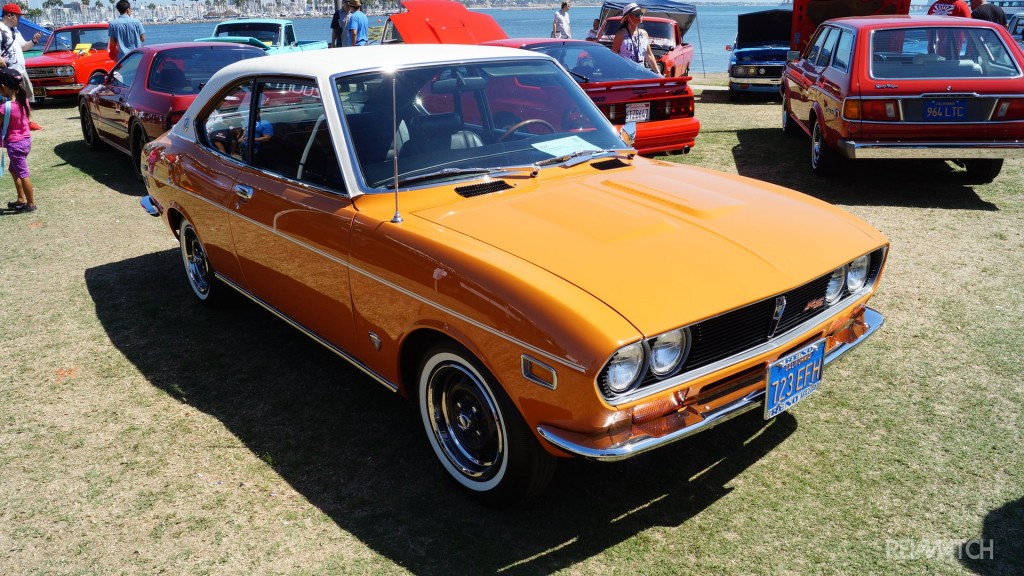 Right next to the Spirit R was this pristine RX-2, one of america’s first tastes of rotary power in an everyday commuter car. Its amazing to think that a car like this was buzzing around the roads of america back in the 70’s. I really hope Mazda’s engineers finds a way to over come the few drawback holding the rotary motor back and see their return not only in their RX line of sports cars but other parts of their line up. 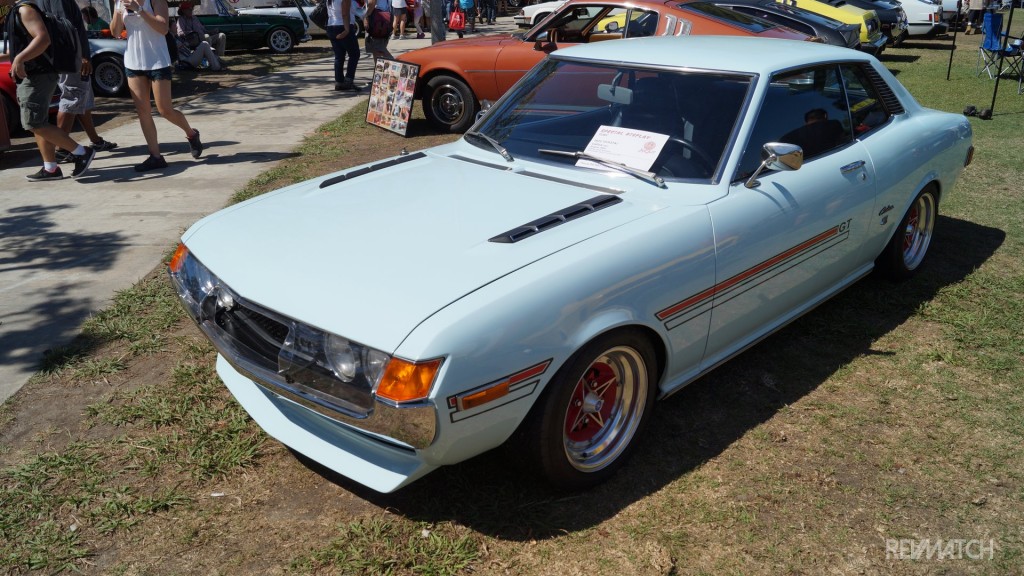 I had such an amazing time at this year’s event. Even after spending almost the whole day there, this was the first time I ever left feeling like there was so much more I didn’t see. JCCS 2015 may have been the best showing in its 11 year history yet. With more enthusiasts and increased attention from the greater car community, the builds only seem to get better and better. It will interesting to see how JCCS will adapt to this quickly growing interest but if they stick to the same focus on quality that made all the previous shows great, JCCS will continue to be the premier classic Japanese car show. Just one suggestion, if I’m getting a pat down at the gate, at least buy me dinner first.